It looks like the AT&T Vu and Sony Ericsson K850i are going to be making their way to AT&T early next year. The AT&T Vu is basically the US-spec LG Prada (LG CU920) and should be landing on Yankee shores in January of 2008. And, to complement the fashion-forward AT&T Vu (we can’t fathom why AT&T would drop the “Prada” moniker), AT&T will be bringing the Sony Ericsson K850i to the US masses as the Sony Ericsson “Ansel” (we know, what is AT&T thinking?) in March. 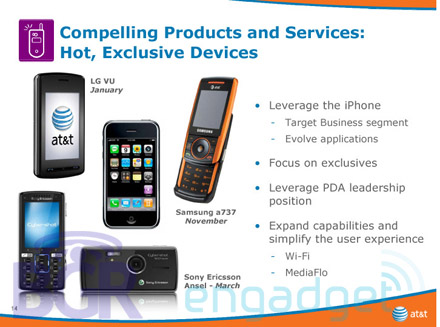 But, the gem that caught our eye was the business-targetted iPhone. That’s right, AT&T is going to be leveraging the iPhone to enterprise customers. The mention of “evolve applications” makes us believe that AT&T and Apple are working on making the iPhone play nice with corporate email servers – perhaps in time for the official iPhone SDK release next year? The iPhone already has built-in Yahoo! IMAP email support, so corporate email niceties should be just a stone’s throw away.

We can’t wait for AT&T upcoming lineup. They’ve already got their bases covered with the AT&T Tilt, iPhone, and the plethora of monoblocks and clamshells in their stable, and with the recently green-lighted Dobson acquisition, the LG Prada and SE K850i should cement Big Blue’s position at the head of the US wireless table.