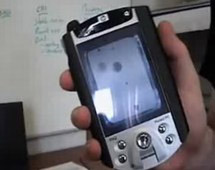 How full is your mobile phone’s battery? Do you have voice or text messages awaiting your reply? Wouldn’t it be nice if you could just pick up your phone and give it a quick shake to get an idea for just how “full” your phone is. In much the same way that you’d shake that can of soda-pop to see if there’s anything left inside, Shoogle wants to use a combination of accelerometers, vibrations, and sounds to bring that experience to your cellphone.

Shoogle is developing technology that would allow a mobile phone user to simply pick up and shake their handset to check for messages and remaining battery life. A full battery would presumably feel like a container full of water, whereas a nearly empty battery might feel like an almost empty beverage container. Unread messages sound like balls in a coffee can – the more messages you have, the more “balls” you feel rattling around inside.

The idea is still in the development stages, so don’t expect your next phone to feature some sort of quick-shake feature. But, you can get an idea for how this system works in the video below.

Here's yet another incident where an exploding mobile phone has caused harm, and even death, to the owner. This time,...