Patent applications, be they from Apple, Nokia, Sony Ericsson, Microsoft, etc., all have one thing in common – they employ hand-sketched, incredibly vague images that outline their ideas. Well, Nokia’s breaking rank with their newest patent application filing. The image you see below isn’t some poor-quality spy-shot of an N-series slider in Nokia’s pipeline, rather, it’s the image that was included in the patent application wherein Nokia outlines plans to incorporate a swiveling/rotating camera module – much like we saw used in the Nokia 5700. 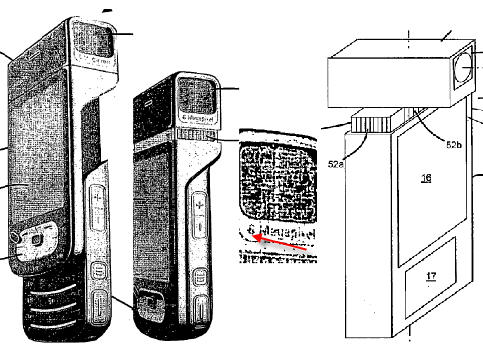 The idea is that a swiveling camera-module will give users more control over the camera’s “imaging axis.” Right, that makes sense, but the swiveling camera isn’t what piques our interest here. A close look at the patent application’s included images shows what looks like a lower-resolution, grainy spy-shot of a real-life Nokia N-series slider that’s already in the works in Espoo. Even closer inspection reveals what looks like an “8 Megapixel” or “6 Megapixel” branding emblazoned on the camera module. Did someone take the time and effort to sketch a fairly-detailed, if grainy, image of a handset for the sole purpose of including an image in the patent application? We’d put our money on “no.”

We’ll likely have to wait until next year, but we won’t be too surprised if Nokia drops an N-series slider with a rotating/swiveling camera module on us.

Nokia: Way to go, Verizon – LTE is the 4G future

With Verizon's recent announcement to kick off LTE (Long Term Evolution) 4G network tests next year (in partnership with Vodafone),...