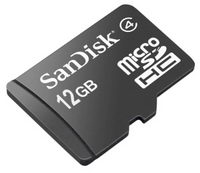 Here’s something for those of you craving for more store capacity on your mobile phone. SanDisk has announced the “world’s largest” microSDHC card that has a capacity of 12GB. Apparently, that’s enough to store a combination of 1,500 songs, 3,600 photos and 24.5 hours of video — at least SanDisk says so.

According to Gizmodo, SanDisk’s reps at the CES said the bigger, 16GB, cards are coming later in the year! Still, some people — including the truly yours — consider 12GB to be quite enough. Can’t wait to see it released… Full release after the jump.

“Mobile phones have become a key part of consumers’ lifestyles around the globe,” said Jeff Kost, senior vice president and general manager of the Mobile Consumer Solutions division at SanDisk. “What many people tend to overlook is the important role that removable storage cards play in enabling the key features of these fully featured mobile phones. In fact, many people are not even aware that their phone has a card slot which is why SanDisk recently launched its Wake Up Your Phone campaign.”

SanDisk has embarked on a ‘slot education’ program to raise awareness of both the card slot included in the majority of new mobile phones available today and the benefits to the consumers who use it. More information is available at: www.WakeUpYourPhone.com.

A 12GB microSDHC is ideal for storing large quantities of music, photos and video. For example, it will be able to store a combination of 1,500 songs, 3,600 photos and 24.5 hours of video.

SDHC is the designation for any SD or SD-based card that is larger than 2GB and adheres to the new SD 2.00 specification required for cards and hosts to support 4GB to 32GB capacities. The specification was developed by the SD Association, an industry standards board, which has also created three classes to define minimum sustained data transfer speed. These cards adhere to the SD Speed Class 4 Rating.

In addition to the microSDHC, SanDisk also offers a broad range of both embedded and removable storage solutions for mobile handset manufacturers and mobile network operators. These include iNAND and mDOC embedded flash drives; microSD, miniSD removable flash cards; and SIM and MegaSIM cards.