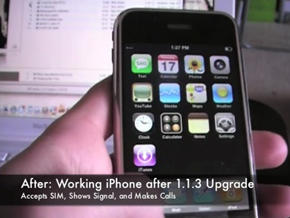 Were you foolhardy, adventurous, or otherwise unlucky enough to attempt to update an unlocked iPhone, resulting in its untimely demise? Have you been staring at you iBrick with longing regret for a functioning iPhone?

Well, today’s your day! It seems that Apple’s new iPhone v1.1.3 firmware is able to breathe new life into your bricked, non-functional iPhone. The firmware update apparently overwrites enough firmware-code to revive that iBrick of yours.

TUAW and Gizmodo has confirmed that a restore and subsequent update (to the new iPhone v1.1.3 firmware, of course) of their bricked iPhone has resulted in a functional device – able to acquire signals and send/receive calls.

The restore/update procedure must apparently be followed by an iTunes-based activation. The iPhone needs to be activated on to an existing AT&T account. Simply inserting a valid SIM card doesn’t seem to do the trick.

So if you’ve been hoping to one day wake your bricked iPhone from its persistent vegetative state, go restore/update it post haste.

Hit up Gizmodo for some video-proof.

[Via: TUAW and Gizmodo]