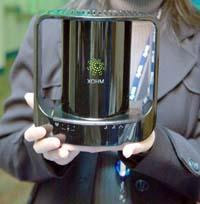 While other carriers are getting ready to launch their 3G service, Sprint Nextel is prepping to light-off their commercial 4G network. Well, actually, WiMAX has been spec’d as a 3G technology, but we’re going to ignore that reality and substitute our own.

Part of Sprint’s WiMAX/XOHM network rollout will take place in the end-user’s domicile. All that WiMAX/XOHM network infrastructure isn’t going to do anyone much good without any hardware to surf those wireless broadband waves. To that end, Chinese-based Zyxel has started shipping limited quantities of wireless routers specifically designed for Sprint’s XOHM WiMAX service. The shipments are part of Sprint Nextel and Zyxel’s 2007 agreement to use Zyxel WiMAX CPE (customer premises equipment) on the XOHM network.

Initial shipments will be limited, but as the network closes in on its launch window, we’re sure those Zyxel factories will be crunching XOHM router in mass.