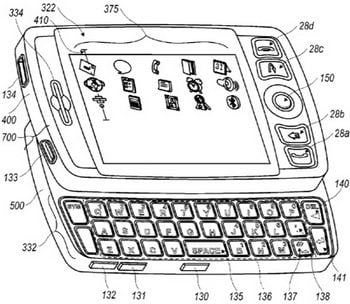 The image above illustrates RIM’s idea to use both a large touchscreen and the full slide-out QWERTY keyboard in their future device(s). As you’ve just seen, the BlackBerry maker is dreaming of the HTC TyTN like smartphone that would appeal to both multimedia demanding users and the enterprises.

As with all the patents, the bare fact that there is some technology patented means nothing. As a matter of fact, the patent filling we’re discussing today dates back from the mid-2006. On the other hand, we know RIM’s onto something. Introduction of the Apple iPhone made every single handset maker turn to interface design and rumor’s on the street is that in the not that distant future we’ll see a touchscreen equipped BlackBerry. Addition of the full QWERTY keyboard seems like a next logical step…

See how we slowly getting all the pieces of the puzzle. 😉