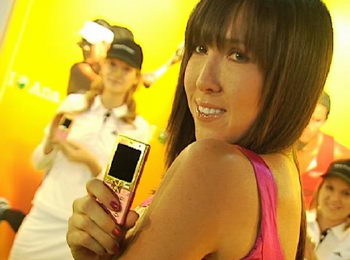 Sony Ericsson is known to sponsor women’s tennis, and has recently named Maria Sharapova as its first global brand ambassador.

Now they’ve picked even better ranked (No. 4) Jelena Jankovic to help them promote the T650i in Precious Gold. For the occasion the Serbian tennis star was dressed in pink and gold dress to match the phone, and wow, she looked awesome as you can see from this short video from the event.

Let’s hope Sony Ericsson’s next move will involve hiring Ana Ivanovic to promote some other phone. Cyber-shot series seem like a good fit — after all I know many people (ok, I admit I’m one of them) who search her photos on Google… 😉

We've already posted the specs, now it's time for the real world photos. Ladies and gents it is my pleasure...