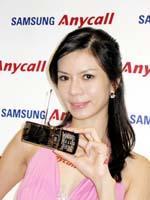 We’ve already spotted the Samsung P960 at the Mobile World Congress in Barcelona. Now they’re moving towards announcing their mobile TV enabled baby in Taiwan. Apparently, the Korean giant is about to introduce the device in the country, with launch scheduled to follow later in the year, most probably somewhere in Q3 2008.

At the moment, four out of five Taiwan’s mobile operators are trialing mobile TV broadcasting and it’s only natural for Samsung to have a device in place, ready to ship it with first commercial mobile TV rollouts. In addition, the P960 is a DVB-H enabled device, hence we may see it hitting European markets as well.

As for the rest of the specs, aside from mobile TV receiver, Samsung’s device also comes with HSDPA support and a 3.2 megapixel camera.

Well folks, LG just announced a new member of its Black Label series of handsets called Glimmer and it's heading...