We’re not exactly sure what’s Telus up to, but apparently they’ll be rolling out two interesting devices in the near future – BlackBerry 8330 Curve and Samsung U740. 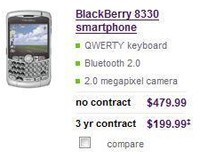 The first one was briefly spotted by HowardForums‘ member “blackdogs377” who even got the screenshot of the Canadian carrier’s website to prove. Soon after he posted it, Telus put the Curve down showing the pink BlackBerry Pearl instead. Hopefully, this was just a temporary glitch and CrackBerry addicts across Canada will be able to grab the full QWERTY keyboard equipped device in the next few days or so.

Then comes the Samsung U740. Actually, Engadget was tipped that Telus will get the U720 soon and will call it “Flipper” so they assumed it’s the same device as the U740, which was recently renamed to Alias by Verizon. As usual, we’ll have to wait a bit more and see where all this goes…

WireFly is offering Palm Centro in Onyx Black for free. As expected it's not exactly free as in free dinner,...