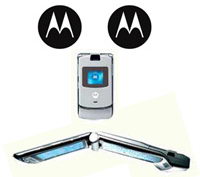 For better or worse, Motorola is lopping off executive-heads like this was Marie Antoinette’s France. Following the exodus of Motorola’s top level execs recently, Motorola has replaced their Head of Mobile Devices in Europe, Mike Fenger, with Steven Nolan, (former) VP of Sales in Europe.

And, in much the same way that Casey Keller decided to ditch his post as CMO, Motorola’s Treasurer, Steve Strobel, has up and left the building. Strobel has been replaced with help from outside the company – Larry R. Raymond, has had experience in private equity, and has worked with Sears Roebuck & Co for 20 years.

Head have been rolling at Motorola, that much is certain. Motorola says that these “leadership changes are part of an overall plan to swiftly transform the senior executive team.” But, whether the move will help revitalize the struggling company remains to be seen.

For what its worth, we sure hope Motorola does right by their former managers’ efforts to turn a profit.

Samsung has announced that their new Samsung "MiniSkirt Season 2" offerings. No, Samsung is not getting into the reality TV...