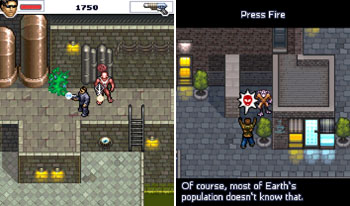 In case you enjoyed the Men In Black movies, you’ll be glad to know that the mobile game publisher Ojom has released the alien-thwarting classic – Men in Black: Alien Assault.

The storyline finds you heading up an investigation to find evidence of the alien invaders. The first lead brings you to the city of New York where alien activity has been rife. So be sure to carry your Neuralizer to ensure there are no civilian witnesses.

As your investigation unfolds, you’ll be picking new, more powerful weapons and smash the sh*t out of (almost) every alien that crosses your road. You may also want to improve the final score, earn extra bonus points and unlock secret levels in the “Story Mode” to blast even more aliens back to wherever they came from.

Sounds like fun, I’m going to try it have no doubt about it. 😉

Here's something for the CSI fans - Gameloft released the second title based on the popular TV series. One thing...