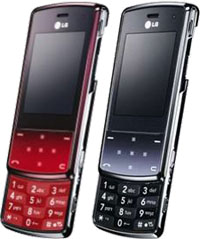 We’ve already posted about LG’s stylish KF510 handset, including the video of its UI. Now it’s officially announced and ready to conquer the markets of Europe, Asia, Latin America, Middle East and Oceania starting from the end of March.

The 10.9mm thin slider looks awesome in both “Stardust Dark Gray” and “Sunset Red” and the contextual LED touch pad with the so called “Interactive Touch Lighting” system which displays various patterns upon the user’s touch makes sure the device is both easy and pleasant to use. There’s also the 3 megapixel camera, MP3 player, Bluetooth and whole lot more bundled in the full metal body of the device… Full release follows after the jump.

The eye-catching color gradations of LG-KF510 are the first ever to be used on a mobile phone, with choices of Stardust Dark Gray and Sunset Red on the full metal exterior. It adds a lustrous sophistication while the 10.9mm slim and durable inner slide of the phone subtly underscores its sleek style.

The gleaming LED lights of the touchpad brighten with a gentle touch of a fingertip, allowing one to scroll and navigate the animated multifunction menu using the new “Interactive Touch Lighting” system.

Besides the stylish design, the LG-KF510 is outfitted with quality features. LG KF510 allows the user to enjoy 3MP camera with a power flash and a one-second response time. With the advanced MP3 player the user can automatically sort music into play lists or categories. These features are supported by a long lasting battery that saves power capacity through Auto Luminance Control (ALC) which self-adjusts to the brightness of the LED screen.

“2008 is the year for a new paradigm in mobile phone design and LG is setting the benchmark,” says Dr. Skott Ahn, CEO of LG Electronics Mobile Communications Company. “We have established ourselves as a leader in this field and the LG-KF510 is a unique addition in our mobile portfolio. With its sleek aesthetic and superior technology, it will appeal to many discerning consumers that value both style and substance.”

LG-KF510 will be available at most major mobile retailers in regions including Europe, Latin America, the Middle East, Africa and Asia, from the end of March.

After eight-month long selection process, Nokia has recently announced winners of the annual "Mobile Rules!" competition at a ceremony in...