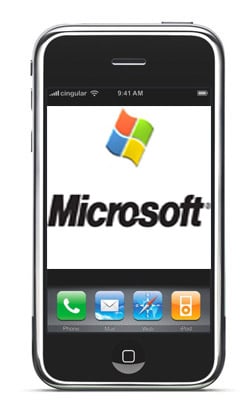 Microsoft may not have cashed in on the initial iPhone hype, but that doesn’t mean the behemoth tech company doesn’t have plans to milk the cash cow from Cupertino. Upon reviewing the recently released Apple iPhone SDK and Apple’s announced support for Microsoft Exchange, Microsoft says it is seriously considering a push into developing applications for the iPhone.

Microsoft is actually one of the largest development houses for Mac software. The Redmond-based company actually maintains a dedicated Mac-development unit in Mountain View, CA. Sales of Mac software have garnered Microsoft $200 million in profits, so it’s not hard to see why the software giant is looking into iPhone development.

“It’s really important for us to understand what we can bring to the iPhone,” said Tom Gibbons, corporate vice president of Microsoft’s Specialized Devices and Applications Group, “To the extent that Mac Office customers have functionality that they need in that environment, we’re actually in the process of trying to understand that now.”

The Apple iPhone can already view Microsoft Word and Excel documents directly on the handset. But, iPhone users are clamoring for better integration for Microsoft Office – the ability to edit those documents on the iPhone. In addition to Microsoft Exchange support, introducing Microsoft Office document-editing capabilities to the iPhone would complete the handset’s role as a true enterprise player.

“It’s really important for us to understand what we can bring to the iPhone,” Gibbons said. “To the extent that Mac Office customers have functionality that they need in that environment, we’re actually in the process of trying to understand that now.”

And, with Microsoft’s recent acquisition of the voice-recognition firm TellMe, the prospect of introducing voice-controlled applications to the iPhone is exciting indeed. Mike McCue, of the TellMe unit, says that his team is looking into whether the iPhone SDK will support voice recognition applications. “If the SDK supports these things,” he said, “we’re absolutely going to get a version out there as soon as we can, get TellMe out there on the iPhone.”

So, does the future of Microsoft include support for multiple mobile operating systems that actually compete with the Windows Mobile platform? Well, seeing as how Microsoft’s Flash replacement, Silverlight, has been pledged for the Symbian platform, it seems that Microsoft has no problem branching out to other platforms – as long as there’s money to be made.

Here’s to waiting for June…