I’m sure many Nokia fans know who Anina is. Those not familiar should know she’s a model, a Nokia Champion and founder of the 360Fashion Network. And now she’s launching her own mobile game! 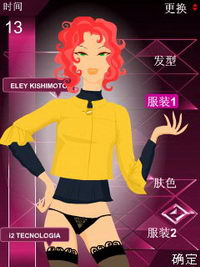 The idea behind the Flash Lite based ANINA DRESS UP app is to “bring reality into the virtual environment” — real model, real designers, and real fashion — while at the same time promoting designer talent on a global level.

As an end user, you’re invited to discover local brands and new designers ahead of the curve. In addition, the latest insider fashion news from 360Fashion are there to keep you both informed and entertained, all while on-the-go.

On the other end of the spectrum, local fashion brands get global visibility.

Back to the game. It’s fairly simple and there are few modes of play. One mode involves playing a memory game where your task is to recreate the outfit shown under one minute. In the other mode, you can mix and match your own outfits or download existing ones to Anina’s closet. When your new design is ready, upload it to online gallery and let the people vote do they like it or not.

Finally, I’ll add that Brasil based i2 tecnologia helped Anina build the game, which you can download from mobi.aninadressup.com.

UIQ Technology just announced a new version of its platform - UIQ 3.3. Based on Symbian OS 9.3, the new...