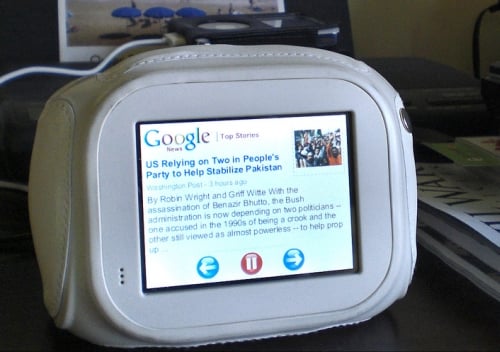 I’ve often held back my thoughts on the Chumby because I thought people would soon come to their senses and realize that it was the biggest waste of invention ever to be created. Sadly via Read Write Web, one of my favorite blogs on the net, I find out that the people behind this decrepit attempt at an internet device just scored $12.5 million in VC funding.

Some back story for those not familiar with the Chumby concept:

A Chumby is a $180 device with WiFi, a 3.5 inch touch screen, 350 MHz ARM processor, stereo speakers, accelerometer and a “squeeze” sensor. The Chumby connects to the net and grabs information which is displayed in the form of widgets created in Flash Lite 3.

That $180 is better put to use buying a new mobile phone or getting a data plan for the device already in your pocket.

Someone please tell me what the point of a Chumby is and why people are paying this company to build such a product. Your mobile phone is with you no matter where you are, it is always connected to the internet, if it is fairly decent then it has WiFi, stereo speakers, a full HTML web browser and with the ability to accept external storage, such as the 8 GB microSDHC card in my Nokia N82, then it can even replace your MP3 player.

My generation has already replaced their desk side alarm clock with a mobile phone and we’re increasingly getting internet access on our handsets as well. What is the value add of a Chumby? I’m dying to know!

The Chumby has a “Linux-based, open-source platform” proclaims Sarah Perez, that’s fantastic, but open source is not a feature to attract mainstream users.

The Chumby is “showcase for your talents” as a widget creator, which again is fantastic, but there are already more than half a billion mobile phones on this planet that have Flash Lite, just like the Chumby. As an artist why would you not want to seek a larger install base to showcase your work?

The Chumy is “made for tinkerers,” so then what do you call people who buy stickers for their phone or phone charms or phone covers or fancy cases or any other sort of accessory that enables a human being to personalize their device?

“The Chumby is designed so that the core electronics can be easily removed from its casing, letting you create your own look for Chumby without having to write code.” You got me there Sarah, but I doubt people are going to buy a Chumby just to take it apart and slap it in some spray painted wooden case that might give you tetanus in the morning when you slam the snooze button on this over priced alarm clock with an IP address.

Update: Video of the Chumy UI via Center Networks.