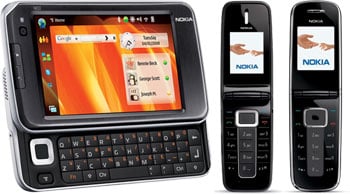 The wait is (almost) over. Just as we expected, Nokia N810 WiMAX has been announced from the CTIA floor. However, don’t expect it to hit the markets till summer, when it will be available in areas where WiMAX connectivity is available. No word whether the original N810 specs are changed or not (aside from WiMAX radio, of course).

In the other news, the Finish giant unveiled two new CDMA devices for the North America – Nokia 3606 and Nokia 1606. The first, more powerful one boasts a 1.3 megapixel camera with LED flash, stereo Bluetooth support, microSD slot. On the other hand, the 1606 model is the basic feature phone that neatly doubles as a flashlight, which will work even if the device is powered off. Both Nokia 3606 and Nokia 1606 are expected to be available in Q3 2008. No carrier partners have been announced.

Verizon has been vocal more than any other U.S. carrier at this year's CTIA Wireless in Las Vegas. Aside from...