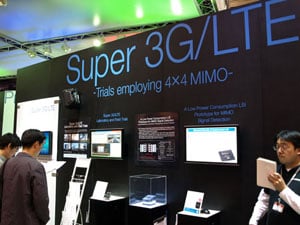 Let’s take a tour of the NTT DoCoMo booth from CTIA Las Vegas 2008. We’re never going to see the handsets that NTT DoCoMo had on display, but it’s nice to see what the island nation of Japan gets to play with every day.

NTT DoCoMo, fresh off its Super 3G / LTE test that achieved 250Mbps downlink data rates, was showcasing said mobile broadband technology. The most conspicuous exhibit at the NTT DoCoMo booth was the Super 3G / LTE display. With four antennas and a MIMO (Multiple Input Multiple Output) setup, NTT DoCoMo was able to post those blazing data transfer rates, and they weren’t shy about sharing with the world (or at least the CTIA attendees) their accomplishment.

Notice the booth-hottie playing a 3D racing game with the tilt-sensor on the mobile phone in her hand. The game was running straight from the handset (output to the LCD TV), showing off its 3D gaming prowess, but more interesting was the accelerometer-based controls.

Sprint prepping to launch iDEN BlackBerry with WiFi in 2008

Here's some good news for die-hard Nextel iDEN network-fans. Sprint CEO Dan Hesse announced at CTIA that Sprint will be...