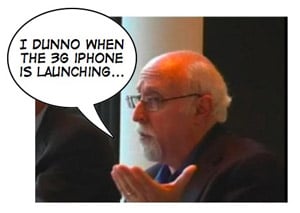 It was nice to think that Uncle Walt had an inside line on Apple’s plans to launch the 3G iPhone in just a couple months, but that’s where it ends. The seasoned gadget reviewer has just done an about face on his comment that the 3G iPhone will launch in 60 days.

Apparently, the comment was overblown and Walt Mossberg says that he has no better idea about the next-generation 3G iPhon’s launch than any of us do. Walt says that his comment saying that the 3G iPhone is due out in 60 days was merely based on widely held speculation that the next-gen iPhone will be launching in June or July – the same speculation that we’ve been holding onto for months now. The comment was made during an aside regarding data networks and Mossberg is surprised that the blogosphere made such a big deal about it. [Hey Walt, that’s what happens when you’re Walt Mossberg and you enjoy the good graces of Steve Jobs.]

“If I knew when this date was, why would I announce it in the middle of a sentence at the Finnish embassy, rather than report it in the Wall Street Journal?” says Walt Mossberg. Good point, Walt. Good point.

We’re still going to bank on a mid-2008 release for the 3G iPhone. If we hold our breath long enough, Apple may just feel obligated to meet our expectations…right?