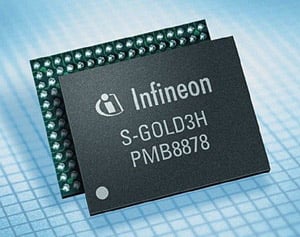 Following on previous rumors that the next-generation 3G iPhone will be powered by a 3G cellular communications chip (cellular baseband) from Infineon, the new iPhone SDK beta reveals that the 3G chip powering the 3G iPhone may indeed be sourced from Infineon. The makers of ZiPhone have found, after drudging through the new iPhone SDK code, references to the Infineon SGOLD3 chip. The Infineon S-GOLD3H is a member of Infineon’s S-GOLD cellular communications chip family and succeeds the S-GOLD2 chip that allows for GSM and EDGE communications on the current iPhone.

The S-GOLD3H chip (PDF link) from Infineon, code named “PMB8878,” provides for application acceleration and media-playback in addition to allowing the faster 3G data transfer rates. And, not to be outdone by other 3G handsets, the S-GOLD3H boasts 7.2Mbps HSDPA which trumps the 3.6Mbps HSDPA data rates that other 3G chips allow. The S-GOLD3H chipset will also support WCDMA, 5 megapixel camera, live video recording (finally!), and two-way video communications.

Support for WCDMA is essential if the iPhone is to succeed in markets like Japan and South Korea, where WCDMA is the cellular standard used. But, more interesting is the possibility that the 3G iPhone will come to market bearing a 3 to 5 megapixel camera that can record video. And, two-way video calling would essentially prove Kevin Rose correct in his predictions for the next-gen 3G iPhone.

On the other hand, AT&T’s HSUPA network rollout should allow for the two-way video communications that is supported by the S-GOLD3H chip. Processor speed on the 3G iPhone should remain the same with the S-GOLD3H chipset as the current, S-GOLD2-powered iPhone.