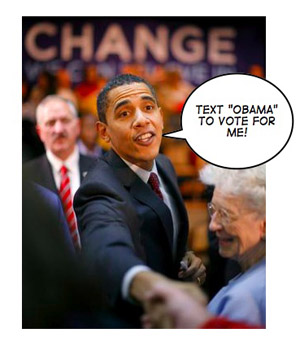 Sure, cellphones are great. If you’re reading this, you probably don’t need anyone to convince you that all the convergence we’re seeing in the mobile phone industry is a good thing. But, does that mean we should use our mobile phones in as many aspects of our lives as possible? Perhaps.

According to a recent study conducted by Samsung, most US mobile phone users are willing to vote for their next president by way of SMS text message.

Of those polled, 61% of people in the 18-and-older demographic said they would cast their ballot with their cellphone. And, not so surprisingly, 80% of survey participants 13-17 years old  said they would be comfortable casting their vote wirelessly.

The prospect of voting with your mobile phone is enticing. Voting couldn’t be any easier. US cellphone users can already vote for their next American Idol via text message, and the service seen tremendous success. But, until security issues can be ironed out, SMS text voting might just be a little too “hackable” to be implemented in the near term.

DALLAS–(BUSINESS WIRE)–A survey by Samsung Telecommunications America (Samsung Mobile) suggests that many teens and their parents across the U.S. would rather vote by text message on their cell phones in the next election rather than go to the polls.

The survey, commissioned by Samsung Mobile, was conducted by Kelton Research and included 300 American teens ages 13 – 19 and 500 American parents with children ages 13 – 19.

a All decimals are rounded to the nearest percentage point. This may result in certain numerical totals adding up to slightly more or slightly less than 100%.

Samsung made it clear during Mobile World Congress that their slim-line Ultra Edition flagship, the Samsung Soul, was ready to...