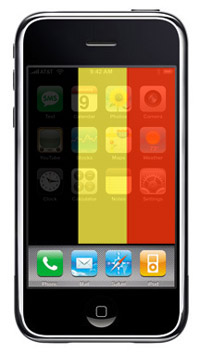 Following previous rumors that indicated that the next-generation iPhone would be made available in Italy without contract or carrier-lock, we’re hearing that the next destination for an unlocked 3G iPhone could be Belgium.

Apple has been open to different business models for its iPhone, and it seems that the company is embracing the notion of offering unlocked versions of its iconic iPhone at premium price-points. Belgian site Astel.be is reporting that Apple is looking to bring the 3G iPhone to Belgium’s three major wireless providers – Proximus, Mobistar and BASE. The carriers are said to be preparing special, iPhone-specific wireless rate plans ahead of the anticipated launch of the next-generation iPhone.

Mobistar is apparently expected to have a two-month exclusivity window on the 3G iPhone, with the remaining Belgian carriers getting the 3G iPhone’s graces by year’s end.

June-ish is the rumored launch window, we’ll keep our ears to the ground on this one.

Qualcomm throwing down with no less than 5 Android handsets

Handset manufacturers are scrambling to get their wares mated to Google's Linux-based Android OS, and it looks like Qualcomm's lending...