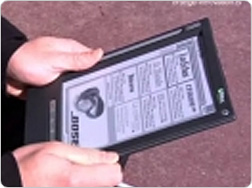 Orange France has announced a new e-book reader – cunningly titled the Read&Go. Whilst devices such as Amazon’s Kindle are more book-focused, this little chap is pretty much just for newspapers – Le Monde, Le Parisien, Les Echos, L’Equipe and Télérama for example. Apparently these get hourly updates, via a mixture of 3G and wifi – interesting….”

There will however be 30 preloaded books, across a number of genres, on the 1GB of internal memory on the device (doesn’t seem enough to me, but then I live in the 8GB world…!).

150 testers will be the first “users” of the device, during a two-month trial – Orange is apparently still looking for applicants to this trial.