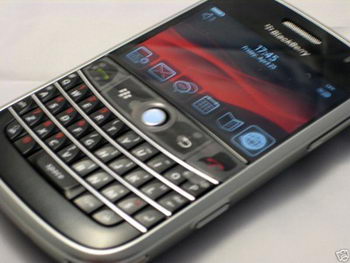 Someone has been selling the unlocked BlackBerry 9000 on eBay, but that action is mysteriously ended now. While we’ve no idea whether this comes from a true RIM insider who wanted to make an extra buck by selling the device before any carrier even had a chance, something tells us this guy/girl knows his stuff. The photos look very legit and so does the spec-sheet. Apparently, the BlackBerry in question sports 3G, EDGE, WiFi and Bluetooth. We guess HSDPA is in the mix too, at least for GSM/UMTS based network. We’ll have to wait little longer before RIM officially bless us with its next-gen all-in-one wonder. In the meantime, enjoy the video of compiled BlackBerry 9000 photos after the jump. As you’re about to see, the upcoming BlackBerry may be worth the wait.