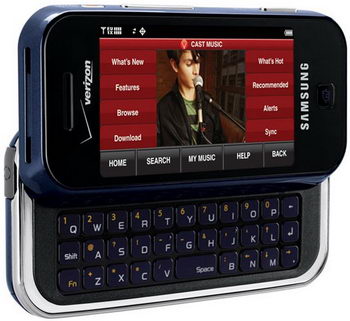 So, it’s not just the new Curve that reached Verizon ahead of schedule. Samsung Glyde joins the party with its glossy surface and the full QWERTY keyboard. Actually, our earlier story was right. The Glyde will hit the Verizon offering within the next 48 hours, but that doesn’t stop you from annoying the carrier’s sales representatives.

In the meantime, let me recap the specs. There’s a 2 megapixel camera with digital zoom, GPS, stereo Bluetooth, large 240×440 pixels screen, microSD memory card slot. Supported services include V CAST Music and Video, as well as VZ Navigator. Finally for the pricing, the Glyde costs $249 after a $50 rebate and with a two-year contract.

During this year's CTIA, among other things, Verizon announced the new version of VZ Navigator. Now it's ready and it...