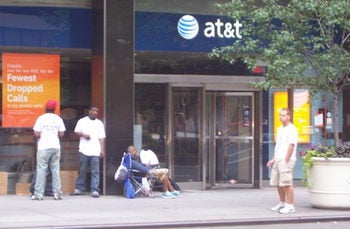 According to CellPassion, AT&T is disallowing any employee vacations from June 15 to July 12, and all leaves have been cancelled during that period. And while we’re not sure whether this is true or not, we’re certainly wondering (in case it is true) what’s AT&T up to? 3G iPhone instantly comes to mind, especially when we know WWDC keynote is set for June 9th. However, it is important to add that we need to see the 3G radio equipped iPhone passing the FCC hurdle, prior to any release.

On the other hand, we’re hearing RIM will initially release the BlackBerry Bold on AT&T and that may be the real reason behind the move. We like the new BlackBerry, have no doubt about it, but it’s more of an enterprise device and in that sense, I don’t see it generating as much buzz as Apple’s products do. Then again, I may be wrong. We’ll have to wait and see. In the meantime, if there are any AT&T employees reading this, we’d appreciate to know what’s going on. Thanks! 😉

Almost a month ago we posted one of the first Sony Ericsson BeiBei leaked photos. As far as we know,...