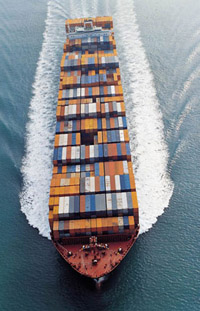 Did Apple just take shipment of the 3G iPhone? Well, it depends on how you interpret the latest report from US customs-tracker ImportGenius.

Apple has apparently received 188 container-ship containers in a North American port. While the new shipments could just be Apple’s continued supply of computers and iPods, there’re rumblings that the containers could indeed hold as many as 40,000 next-generation iPhones each. Apple has historically marked their containers containing desktop computers as, well, “desktop computers. This latest rumor is based on the fact that these containers were marked as holding “electric computers.”

Could the “electric computers” within the 188 containers actually turn out to be new iPhones toting 3G radios? It’s possible.

Whatever the case, we’ll probably see the 3G iPhone in the flesh in just a matter of weeks. The wait continues…