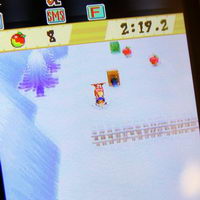 Sony Ericsson phones may already be known as one of the top choices among mobile gamers, but that’s obviously not enough for both Swedish and Japanese shareholders, especially in a time when they’re facing the competition from Nokia’s NGage platform.

The handset maker has reportedly signed a deal with California-based GestureTek, which we already covered in the past and which uses the handset’s camera to sense movement. The idea is to bring the Wii-like gaming experience to camera-equipped Sony Ericsson phones, which don’t have an accelerometer built inside (like the K850i and W910i models, for instance); and to ultimately establish Sony Ericsson as a mobile gaming brand.

We’ll watch this closely, have no doubt. In the meantime, if you need a reason to rejoice, you should know that among the first titles that will use the faux-accelerometer are Crash Banicoot and Super Monkey Ball.

Well, well, Sony Ericsson or at least someone very close to the Swedish-Japanese company has made the official P5 Paris...