Some rumors suggest that the 3G iPhone will launch with a casing that’s thicker than the current iPhone and others point toward Apple’s next-generation iPhone sporting a thinner casing. It’s all muddled in a fantastically confusing pool of 3G iPhone rumors that almost makes your head hurt. And, to make sure that pain doesn’t subside anytime soon, iLounge has posted pictures of what seem to be the 3G iPhone’s touchscreen. The thing is, there’s two of them – and they come in two different sizes.

The pictures are allegedly from Host Technology, a Taiwanese company claiming to be providing the touchscreen components for Apple’s next-generation iPhone. The company claims that their touchscreen is superior to the Balda-sourced touchscreens in the current iPhone in that Host’s “projected capacitance touch panels” won’t lose sensitivity over time and is more resistant to high-humidity environments and water. 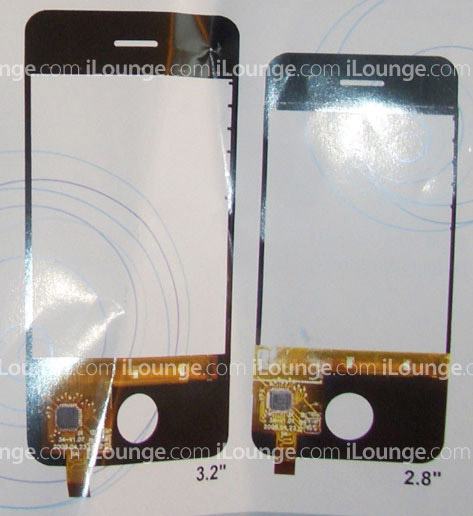 There are 3.2-inch and 2.8-inch versions of the Host touch panels reportedly ready to pull duty in Apple’s iPhone lineup. But, the prevailing consensus is that the 2.8-inch panels (if they are legit) won’t be seeing the light of day on any 3G iPhone, but will most likely be part of an iPhone Nano or future iterations of the iPhone.

Now, here’s the interesting bit. The 3.2-inch touchscreen could indicate that Apple has indeed shaved some significant mass from the current iPhone and will be launching the 3G iPhone in a more svelte and sleek package.

On the flip-side, the 3.2-inch touchscreen might be destined for the 3G iPhone with a thicker casing, while the 2.8-inch touch panel could be used in a smaller iPhone without 3G. If true, those competing rumors that the next-generation iPhone will be thicker or thinner than the current iPhone could each be referring to different next-gen iPhone models.

Could we see a smaller iPhone, lacking 3G and priced at $200, get announced on June 9? Time will tell, and the wait is getting unbearable at this point.

The leading online resource for clinical drug and related health information Drugs.com recently announced the iPhone-optimized version of its website....