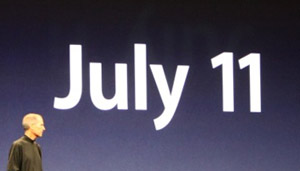 Whew, that was an information-packed keynote, wasn’t it?

Here’s a quick re-cap on what to expect with the new iPhone 3G. The form-factor is mostly the same. Same 3.5-inch multi-touch screen, same button-less face, minimalist design – but with a few changes.

It’s thinner at the edges (a la MacBook Air), comes with a glossy-black plastic backing (and a special edition white version available), does 3G speeds with ease, integrated GPS with Google Maps live tracking, and will have even better battery life. How does 24 hours of audio and 5 hours of 3G talktime sound? Yea, we think it’s trick too!

Apple will offer their new .Mac replacement, mobile me, for $99 a year after a 60-day trial period. The new mobile me service allows for push everything – email, calendar, contacts, photos. And it syncs almost instantly.

There are going to be some incredible applications and games for the iPhone available through the AppStore – and it looks like free or $9.99 is going to be the pricing structure. At least we won’t have to worry about which application is going to be cheaper than another.

Enterprise is fully supported, which is good for business users. And the iPhone 3G’s faster data connection should make quick work of all that push emailing to and from your colleagues.

And, the iPhone 3G will launch in 20 countries worldwide on July 11 for $199. Talk about affordable – there won’t be any of those “it’s too expensive” arguments against the iPhone 3G floating around that we saw last year with the original iPhone’s launch.

That’s it for now, time to let the fingers catch a break.

Alright folks. It's June 9th and that means Apple's WWDC 2008 is kicking off today. Steve Jobs is undoubtedly getting...