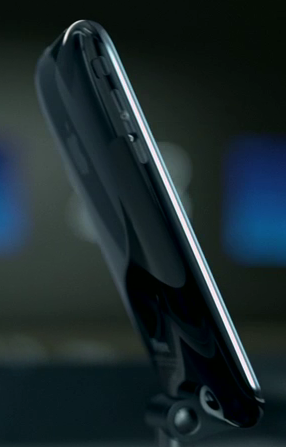 An Apple product announcement wouldn’t be complete without a snazzy, new television advertisement to kick off the new device’s birth. So, following on the Apple WWDC 2008 Keynote announcement of the iPhone 3G, Apple has posted the first iPhone 3G ad.

The slick TV ad depicts a couple of security-types walking down a hallway to reveal a glimpse of the iPhone 3G – an advertisement befitting Apple’s minimalist design philosophy. But, the real gem in this video clip comes toward the end where we get a full almost-360 degree view of the iPhone 3G. That thing is sexy! Solid-metal buttons adorn the iPhone’s edges, with the now-familiar single home-button leaving the iPhone 3G’s glorious 3.5-inch multi-touch display unmarred.

The screen cap to the left doesn’t do justice to the all-metal buttons due to reflections, but a quick peek at the video will no doubt give you a good idea for just how sexy this newest iPhone really is.

Peep the video at Apple’s new iPhone 3G webpage, or below.

Apple launches MobileMe for data sharing in the cloud

The newly announced iPhone-successor has taken the lion's share of the Apple WWDC limelight today, but there are other notable...