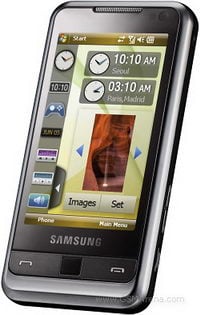 Samsung has officially announced its real iPhone killin’ device. Instinct is just not smart enough to compete with Apple’s handset, but the 12.5mm-thick i900 certainly is. Let’s quickly go through specs, shall we:

And that’s it! Boy do we want one. The only problem I see is that WQVGA screen which may find hard time competing with the Diamond’s VGA and/or XPERIA’s WVGA, though, that’s not actually a problem.

Finally, those of you attending the CommunicAsia expo in Singapore from June 17 to 20, will be amongst the first ones to try out Samsung’s new baby. In the meantime, hop over to GSMArena for some real-life shots.