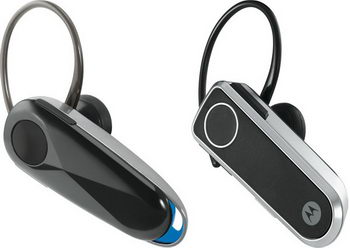 Don’t know about you, but lately I respect Motorola more for their accessories than for their phones. Take a look at the S9-HD active Bluetooth headsets or ROKR T505 car-kit that also acts as FM transmitter, and you’ll see what I’m talking about.

Now they’ve announced two new Bluetooth headsets, H560 and H620, both of them featuring noise reduction and echo cancellation technology and TrueComfort design, as well as automatic volume control that increases or decreases the volume based on the noise level in the surrounding environment. Not that you should compare the with awesome Jawbone 2, rather they seem designed to be decent, affordable headsets for everyone.

The H620 we like better. It’s the first Moto’s Bluetooth headset designed to be used in car, promising to remove that annoying road noise in talk…

Both the H620 and H560 are expected to be available in Q3 2008, and if you want to read the official PR mambo-jumbo, here’s the link to the release.

Apple and Steve Jobs threw us all a slight curveball by announcing an incredibly low-priced iPhone 3G - even Sprint,...