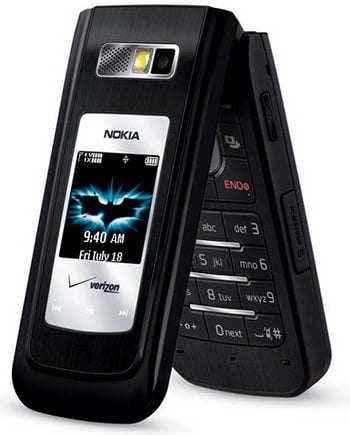 With the next Batman movie scheduled to hit theaters within a month (July 18), Verizon and Nokia are releasing the special edition of the Nokia 6205 clamshell. The device comes in a “mysterious black color” and is embellished with a subtle “The Dark Knight” emblem. In addition, the device is pre-loaded with themed wallpapers, voice tones, animated screensavers and a full movie trailer.

Specs wise, the Get It Now-enabled Nokia 6205 The Dark Knight edition is identical to the original device and includes such features as 1.3 megapixel camera, Bluetooth, 58 MB of internal memory and a microSD memory slot. Supported services include VZ Navigator and Mobile Web.

Finally, in the Nokia 6205 The Dark Knight edition retail box, customers will also find a Joker playing card with a code and a link to the FightForGothamCity.com website, where they can play games to win more The Dark Knight-themed prizes, and download exclusive The Dark Knight content from Verizon’s V CAST service.

The Nokia 6205 The Dark Knight edition will be available online for $69.99 after a $50 online instant rebate with a new two-year customer agreement.

It looks like Nokia's got another take on the Nokia Tube. No, it's not a variant to the Nokia 5800...