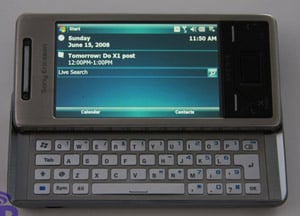 And, just to make sure the rest of us are drooling with envious lust, Boy Genius has posted their own hands-on review of the Sony Ericsson XPERIA X1 – replete with device impressions and photos. The XPERIA brand represents the highest end of Sony Ericsson’s “converged device” market, and as such, it get high marks for all its techno-wizardry. The optical joystick is apparently peachy keen, as is the gloriously wide 800×480 WVGA display. And, with UMTS/HSDPA in tow to make wireless data transfers on Windows MObile 6.1 a breeze, the XPERIA X1 is apparently a joy to use – despite the fact that the Boy Genius‘s pre-production version of the XPERIA X1 tended to bog down a bit.

First-impressions aren’t the end-all-be-all when it comes to handset reviews, but this pre-production XPERIA X1 scored low marks in the QWERTY-keyboard department. That snazzy, arc-sliding QWERTY keyboard is apparently not as easy to use as it was cracked up to be. Lack of feedback is mentioned as the keyboard’s worst attribute – interesting, because our own (limited) time with the XPERIA X1 left us with a positive impression of the solid keyboard and sliding mechanism.

It seems LG is not the only one which likes to certify its devices for DivX. Samsung also does that,...