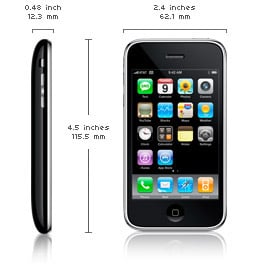 Following on previous estimates that the iPhone 3G totaled up a BOM (bill of materials) in the neighborhood of $100, iSuppli, the  supply analysis experts have come out with their own estimation of how much the iPhone 3G costs Apple to make.

iSuppli puts Apple’s parts out-go at $173 for the iPhone 3G, compared to $226 for the first-generation iPhone. That gives Apple a $53 per unit savings on the cost of parts for the iPhone 3G.

But, just how did Apple manage to cut $53 off the cost of the iPhone?

Apple’s buying power in the Flash memory market netted them memory chips on the cheap, and by reusing components, like the Samsung-sourced processor, from the original iPhone, Apple managed to leverage their economies of scale to save on parts for the next-generation iPhone 3G.

Apple has introduced new GPS hardware from Broadcom and a 3G chipset from Infineon, but most of the other iPhone 3G’s guts are carried over from the iPhone 2.5G. Apple has “done a good job in using what worked well with the first one and making improvements where it mattered,” says iSuppli analyst Jagdish Rebello.

Apparently, the biggest money maker is the 16GB variant of the iPhone 3G. The extra Flash memory costs Apple $23, but adds a full $100 to the retail price – those are some nice margins indeed.

We've already seen iPhone related lawsuits cropping up from legitimate patent holders as well as frivolous settlement-hunters. And, with the...