By now it’s obvious that Apple is planning to hit the global smartphone market hard with the next-generation iPhone 3G priced at just $199 for the 8GB base-model. And, we already know that the iPhone 3G will be selling like Botox treatments in Beverly Hills.

But, just how many iPhone 3G units will Apple sell through its first year of sales? Pacific Crest’s Andy Hargreaves likens Apple’s new iPhone 3G pricing structure to past price-cuts on the iPod and Sony PSP handheld gaming device. Both products saw massive increases in sales volume once the devices broke below that almost-magical $200 price barrier. 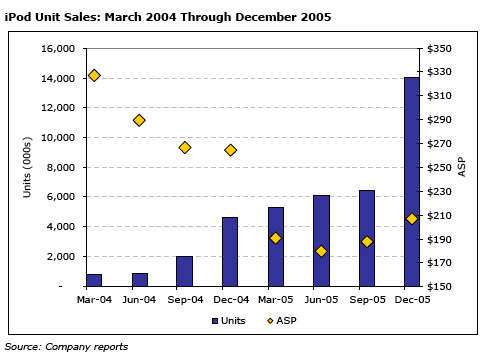 As such, the iPhone 3G’s $199 price-point could help Apple to boost handset sales to levels several times greater than we saw with the original iPhone. In comparison, Apple saw their yearly iPods sales volume grow from 8.3 million units to 32 million when they lowered the price-tag to just south of $200. If that same trend holds true for the iPhone, Apple could see iPhone sales increase from 6 million to 23 million units over a 12 month sales cycle.

Of course, the numbers are just projections and they don’t even consider the effect of heavily subsidized (and even free) iPhone 3G offers from carriers outside the US. With O2 offering the 8GB and 16GB iPhone 3G variants for prices ranging from free to £159, Apple could see millions of iPhone 3G handsets sold in the UK alone – adding to Apple’s worldwide sales figures.

And, given Google’s Android delays, Apple will likely be sitting pretty on their pile of iPhone 3G cash. Just how pretty they’ll be sitting remains to be seen.

Who doesn't like a good party, especially if the drinks are free? Rogers Wireless has started to send out invites...