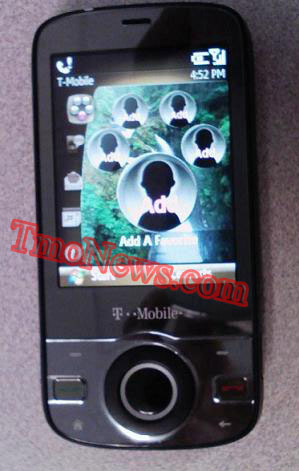 With T-Mobile having announced their T-Mobile @Home UMA (unlicensed mobile access) service for a July 11 launch, additional UMA handset details are starting to creep out of the woodwork.

HTC’s original T-Mobile Shadow (basically a re-branded HTC Juno) handset was a success for T-Mobile, and it seems that the No. 4 US wireless carrier is looking to go for a repeat with a Windows Mobile-powered follow-up to the Shadow. The T-Mobile Shadow II will be again manufactured by Taiwan’s HTC, and will be the first Windows Mobile-powered UMA handset that will be compatible with T-Mobile’s @Home service.

The T-Mobile Shadow II may just end up as the premier UMA handset offered from T-Mobile.

And, with that glossy-black finish making for a purrty little smartphone, the Shadow 2 should be able to hold its own as T-Mobile’s consumer-oriented Shadow flagship.

How much do you love blurry spy-shots of not-yet-final mobile phones? We do too. The latest peak of Palm's upcoming...