Can’t wait to get your hands on RIM’s first-ever go at making a clamshell (flip-phone) packed with all the bells and whistles that BlackBerry users get to play with everyday? Of course you can’t, neither can we.

Aside from being the push-email pioneer’s first BlackBerry flip, the BlackBerry 9100 KickStart manages to pack in a quad-band (850/900/1800/1900Mhz) GSM radio, WiFi, 2 megapixel camera, and standard 3.5mm headphone jack along with BlackBerry staples like the “Next Gen” SureType keyboard and BlackBerry OS. 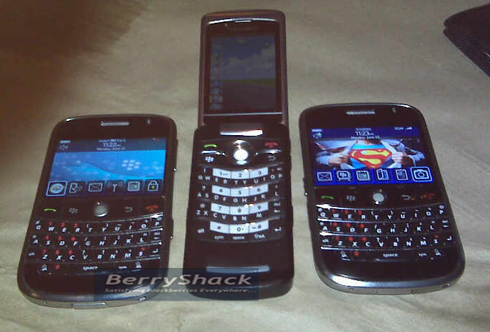 The BlackBerry KickStart will apparently be running BlackBerry OS 4.6 (although the above picture seems to show otherwise) and will be thicker than the BlackBerry Bold 9000 – we didn’t expect RIM to be able to pack the KickStart with as many features as they did without sacrificing some girth. The BlackBerry KickStart’s thickness (especially while closed) might be a deal-breaker for some, but for those of you that need a clamshell in your pocket, we’re expecting a September release.