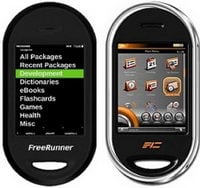 Open source fans among you probably already checked out the OpenMoko Neo FreeRunner review. The day when you’ll be able to actually grab the device is set for this Friday, July 4th. That’s of course in case you’re ready to pour out $400. That may sound a lot, but remember there’s a lot under the hood — including 2.8-inch VGA screen, WiFi, aGPS, 128MB of RAM, Bluetooth 2.0, two 3-axis motion sensors, and whole lot more.

Openmoko will sell the phone directly from it its website and via distributors in the EU, India and North America… Full release follows after the jump.

PRESS RELEASE – Openmoko, developer of the first open mobile computing platform today announced that on Friday, July 4, it will open the online store for purchase of the Openmoko Neo FreeRunner, a OpenMoko FreeRunner mobile phonemobile device that the company says will help to enable ubiquitous computing for the 21st century. Shipping to customers will commence on July 7, 2008.

The Openmoko Neo FreeRunner utilizes GNU/Linux and comes with core software for dialing, SMS and recording contacts. Openmoko will supplement these features with periodic downloads beginning with a software suite that takes full advantage of the phone’s hardware platform. The new software, debuting at Linux world in August, will provide exciting new location based applications.

Openmoko frees developers from constraints of closed mobile architectures so they can apply the power of mobility and a flexible development platform to create mobile applications for specialized markets. Using the Openmoko mobile platform, the Free and Open Source Software (FOSS) community and developers can create unique versions of the FreeRunner phone, modifying the way the phone operates and even the way it looks. CAD files publicly available under a Creative Commons license make it easy for industrial designers to change the appearance of the Openmoko Neo FreeRunner and select alternate materials and finishes to tailor the phone’s look and feel.

Distributors in the EU have already received shipments of the Openmoko Neo FreeRunner.

Openmoko will be at LinuxWorld Conference & Expo in San Francisco, August 5-7, 2008 in booth 1625 and in the Linux Garage Pavilion booth 1234 in the Moscone Center North Hall.

The Openmoko Neo FreeRunner has a suggested retail price of $399. Openmoko will sell the phone directly from it its webshop www.Openmoko.com and via distributors in the EU, India and North America.

It's a good marketing for handset makers to prepare the special edition phones for the Olympic Team of any country....