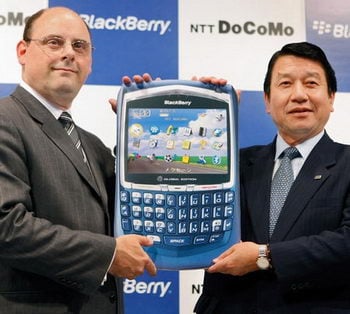 As a response to requests from individuals and small to midsize businesses, NTT DoCoMo is launching BlackBerry Internet Service for direct connection to the Internet without the need for a dedicated server on August 1st.

The BlackBerry Internet Service (BIS) will cost 3,045 yen (around $29) per month with taxes. The FOMA basic monthly fee and normal packet charges will apply separately.

In addition, DoCoMo is preparing a discount packet-billing plan to be launched on September 1. The so called BlackBerry Data Transmission Package will enable users to transmit up to 80,000 packets of data per month for a flat charge of 1,680 yen (about $16). Data exceeding this limit will be charged at 0.0525 yen per packet.

The carrier will demonstrate the new BlackBerry Internet Service during Wireless Japan 2008 at Tokyo Big Sight from July 22nd to 24th.

Crazy or not, the iPhone 3G queue has started. As of Friday, July 4th, about ten people have started a...