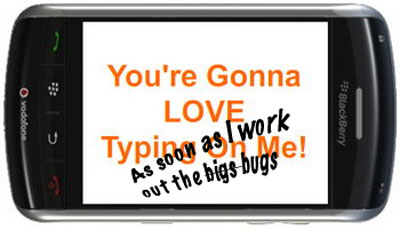 Just as we got done telling you about how great the BlackBerry Thunder’s on-screen, localized haptic-feedback keyboard will be, here comes another report that indicates the Thunder is, so far, unable to live up to its name – such is the rumor-game.

But, this latest report indicates that RIM is having some serious developmental problems with the BlackBerry Thunder. No, it doesn’t have ADD, we’re talking about hardware and software development here.

Apparently, the UI is sluggish, lags when scrolling, and button-clicks just don’t register fast enough. On top of that, the accelerometers go wacky when you move the device and that seriously trick localized haptic feedback system causes the entire display to “ripple” with every touch of the display.

With all the developmental problems plaguing RIM’s apparent answer to the touchscreen revolution, we’re not likely to see the almight RIM BlackBerry Thunder for at least another 4-5 months. Especially considering that most people that have had the privilege of handling the device think it’s a “joke.” That’s bad.

We’ll keep an eye on Thunder-developments for our readers. Stay tuned…

Looks like the Boy Genius has come through again with another pre-release handset. This time, the stakes are higher, with...