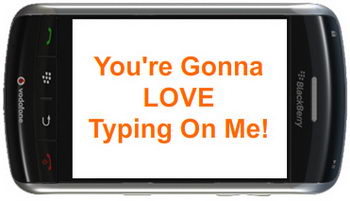 Apparently, the upcoming BlackBerry Thunder will have an awesome touchscreen keyboard. While this is far for confirmed, we have reasons to believe there is some merit to the story. Two arguments emerge – first, RIM is known to make devices with high-quality keyboards, and second, iPhone and other all-touchscreen devices raised the bar. The latter is there to tell RIM they should do something extraordinary, and it seems they are on the target.

The Thunder will reportedly sport localized haptic technology that should enable users to get immediate feedback on their finger on the place where they actually pressed the screen. Additionally, the upcoming BlackBerry will be able to display either full QWERTY or SureType keyboards on its screen, making sure both Pearl and Curve users feel like home.

One thing is not clear, though. No one mentions multi-touch and the way I see it the Thunder will lack that feature. Now that I’m thinking about it, it’s not easy to imagine using a multi-touch haptic feedback touchscreen…

Again, nothing is confirmed at this stage and we can only speculate until we get our hands on first units. Stay tuned, in the meantime.

Motorola's latest flagship cameraphone has been making the rounds of late. The folks over at Crave managed to get their...