The iPhone 3G will be launching at 8am local time on July 11. And, as soon as sales go live, the US is going to see a tremendous shift in the smartphone market. According to a new survey from ChangeWave Research, consumers are looking more toward the iPhone 3G than either the RIM-made BlackBerry lineup or any smartphone offerings from Palm. So much so, in fact, that the iPhone 3G could have a “tsunami-like” impact on the US smartphone market.

While the iPhone 3G currently ranks as the third most popular smartphone in the US with 11% market share, compared to RIM’s 42% and Palm’s 14% share, ChangeWave suggests that the iPhone could skyrocket to at least second place with the iPhone 3G. 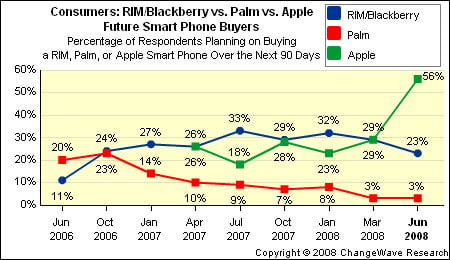 Surveying 3,567 consumers following Apple’s June 9th iPhone 3G announcement, ChangeWave found that 56% of consumers planning to purchase a smartphone in the next 90 days are looking to fill their needs with Apple’s next-generation iPhone 3G. Of the respondents, 23% plan to get a RIM-made BlackBerry handset, while only 3% of smartphone enthusiasts have a Palm device in mind.

The BlackBerry Bold will likely hold up RIM’s side of the smartphone market, while the Palm Treo 800w will be giving Palm-fans a does of new hardware. But, with the iPhone 3G-fighting BlackBerry Thunder reportedly delayed until the end of 2008 due to developmental struggles, how will RIM fare against Apple in the US?

If these figures project reliably in to real-world consumer intentions, we’ll be seeing twice as many new iPhone 3G handsets hit the market over the next few months than we will any BlackBerry handset.

Note: the chart focuses on those respondents indicating interest in smartphones

Apple: iPhone 3G activation to take 15 minutes, be prepared to wait in line

A recent interview with Apple's retail chief, Ron Johnson, has shed some light on Apple's plans for getting customers in...