For those of you that followed IntoMobile’s live streaming coverage of the iPhone 3G launch event from beautiful Santa Monica, California’s Third Street Promenade Apple Store will already know that the launch-day madness was almost as frenzied as last year’s media-blitzed festivities. But, with Apple and AT&T insisting on having their next-generation iPhone 3G activated in-store, the process, from start to finish, of buying an iPhone 3G was a considerably more drawn-out proposition.

That being said. I finally have an iPhone 3G in my hand. Having spent 18 or so hours on the boardwalk of one of Santa Monica’s premier shopping attractions, chatting it up with like-minded iPhone 3G fans, playing games (Monopoly), and waiting patiently for Apple to open the doors to the new smartphone hotness that is the iPhone 3G, I can definitely say that it was all worth it. 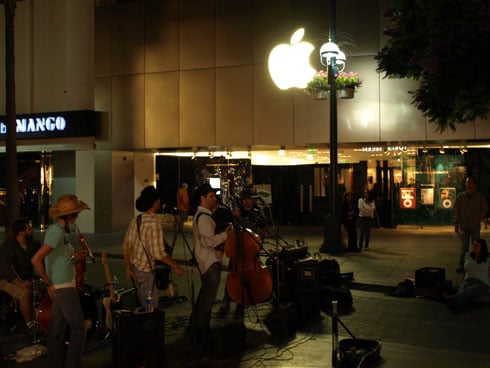 You would think that, after last year’s iPhone-activation snafus, AT&T and Apple would have increased capacity and made preparations to handle the flood of iPhone fans looking to activate their device and start playing on AT&T’s 3G network post haste. But, no.

While AT&T and Apple made easy work of registering the handset on a new AT&T contract, most iPhone 3G users were told to go home and activate the handset through iTunes at their leisure. What we took away from the experience was that Apple and AT&T were too bogged down with activation requests through their iTunes accounts and couldn’t get customers’ iPhone 3Gs activated fast enough. Still, AT&T and Apple did a good job in making sure that all new iPhone 3G sales were linked to new contracts – the unlocked iPhone 3G secondary market will be hurting for sure.

There are scattered reports of iPhone 3G users still having activation problems or delays today. And, a quick trip down to the local Apple and AT&T stores reveals that people are still waiting 3 hours, or more, to get their hands on an iPhone 3G. The wait-time apparently hasn’t deterred too many iPhone 3G fans from spending a beautiful Saturday afternoon waiting in line for Apple’s next-generation handset.

I’m off to play with MobileMe and explore the AppStore to it’s fullest. Expect to hear more about the iPhone 3G in the next few days.

We've already seen the first iPhone 3G dissected by iFixit. Another company also wanted to get some media attention the...