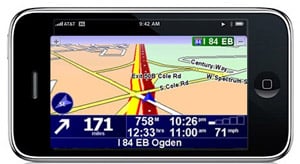 Apple’s iPhone team apparently took in to account a veritable grocery list of requested iPhone features, and found that turn-by-turn GPS navigation is a high-priority. Cut-and-paste functionality? Not so much – we probably won’t be seeing official cut/paste on the iPhone anytime soon. But, it’s not out of the question in the longer-term.

And, with GPS navigation software getting ironed out for the iPhone 3G, we’re sure the masses won’t mind having to wait for true cut-and-pates to hit the iPhone. Perhaps those “complicated issues” that Apple is working out for the GPS software is related to TomTom’s push to bring their nav application to the iPhone 3G.

Stay tuned. We’ll be keeping an ear to the ground on this one.

Update:
Apparently, Mr. Pogue’s belief that the Apple iPhone 3G GPS hardware wasn’t up to the task of tracking  GPS coordinates at turn-by-turn resolutions is rooted in a conversation he had with Apple’s iPhone tech-lead. Stay tuned for updates…