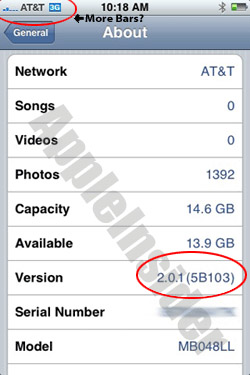 As with the original iPhone, updates to the Apple handset’s Mac OS operating system are plentiful. The latest iPhone 2.0 OS hasn’t even been official for a week and we’re hearing reports that Apple is already testing the next revision of the firmware. iPhone 2.0.1 OS has been spotted in BGR‘s server logs, with packet-requests originating from the San Francisco, CA. area – near Apple’s Cupertino-based headquarters.

This newest iPhone operating system will presumably bring with it some bug fixes. But, it’s not clear what, if any, additional features will be included with the firmware update.

Could we see turn-by-turn GPS navigation in the next iPhone 2.0.1 firmware update? It sure would be a nice little addition to the iPhone 3G’s feature-set, but something tells us that it’s still too soon to expect such functionality.