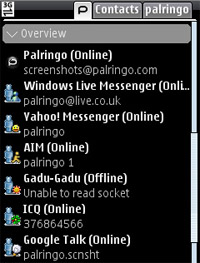 Palringo, a messaging service that extends all the functionality of PC-based IM services like voice and picture messages to mobile devices, has released its client for select BlackBerry smartphones (Curve, Pearl, 8800 series).

Using Palringo, BlackBerry users can chat using voice and picture messages as well as traditional text. Furthermore, they can also chat with their buddies who use other IM clients like AIM, Windows Live Messenger and GTalk through the single Palringo interface.

Like some similar multi-IM apps, Palringo presents user’s contacts from all services into one combined, presence-aware list, thus eliminating the need to continually switch between multiple IM tools. In addition, Palringo’s “vocal instant messaging” combines walkie-talkie style voice chat, the real-time text functionality of IM and the ability to share pictures — all within the context of one “threaded” discussion.

Palringo’s BlackBerry application is available as free download from their website. Finally, in addition to BlackBerry phones, Palringo also works on smartphones running Windows Mobile or Symbian, as well as on Java-enabled feature phones.

What good is a Tuesday afternoon without a preview of the BlackBerry Bold 9000? Boy Genius managed to wrangle himself...