HTC hasn’t been all that supportive of the ATI Imageon video hardware on board HTC handsets using Qualcomm’s MSM7500 and MSM7200 chipsets. They’ve released firmware revisions that offer some video performance boosts, but nothing to the level that many irate HTC customers are looking for in their high-end smartphone.

So, without any help from HTC, the HTCClassAction organization has decided to take it upon themselves to create their own homebrew video acceleration drivers for certain HTC 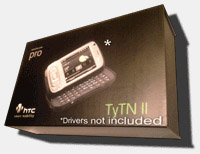 smartphones. You’ll remember the HTCClassAction grass-roots organization from their attempt to petition HTC to deliver drivers that were capable of leveraging the 2D and 3D video acceleration hardware, the ATI Imageon circuitry, on their handsets.

Hit the video below to see the 3D drivers in action.

We also have to commend HTC for letting this grass-roots effort continue. The lack of an official 3D video acceleration solution from HTC is mostly likely a bottom-line issue (which is just business), but that doesn’t mean HTC is out to punish their eager and ever-enthusiastic customer-base.

If you feel like testing out this video acceleration solution on your own, head on over to HTCClassAction.org and download the .cab file to your HTC Kaiser.
[Via: HTCClassAction]

iPhone 3G upgraders and anyone having upgraded to the iPhone 2.0 OS on their first-generation iPhone will likely already know...