What’s the big deal with GPU processing and Apple’s push to bring OpenCL to their Mac OS X “Snow Leopard” revision? It’s all about processing power and speed. You see, there’s only so much you can get done with a traditional CPU, sporting two or four processing cores. But, there are over a 100 microprocessing cores waiting inside a GPU, ready to crunch through data like a rabid pack of hyenas.

But, these dozens and dozens of processing cores can work their way through data so fast that special programming wizardry is needed to piece-out large data chunks to give each GPU processor a small, manageable snippets. And, the data has to be served up fast enough to keep up with the ravenous GPU processors’ high-speed data crunching – something that hasn’t been standardized. Yet.

That’s where Apple’s OpenCL technology, slated to debut in Mac OS X Snow Leopard, comes in. Apple is working to standardize OpenCL to leverage the incredible data-munching prowess of GPU cores to 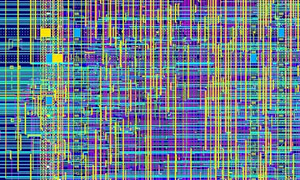 augment the CPU’s processing capabilities. By using GPU-augmented processing strategies, we could see incredible gains in processing speed and throughput.

So, how does this relate to the mobile space? Well, seeing as how the Mac OS used on the iPhone uses the same underpinnings as Mac OS X, any updates to the codebase should be made available to the iPhone in short order. And, with GPU processors boasting up to 10 times better power efficiency over traditional CPUs, it makes sense to take advantage of embedded mobile GPU processing in the iPhone.

We’ll likely see GPU-based parallel processing hit the iPhone in the future, the only question is just how long it will take Apple to port OpenCL to the iPhone’s Mac OS operating system. But this much is certain – GPU processing will bring a new wave of super-powerful mobile processing platforms with more efficient power-draw. We can’t wait.

Like any good federally-sanctioned frequency spectrum auction should do, the recently-wrapped Canadian AWS (advanced wireless spectrum) spectrum was auctioned off...